Source: scientias.nl, photo by Aloaiza
It sounds contradictory: living in water but not drinking for months. And yet that's exactly what sea snakes do. They wait for rain and then drink the fresh water. If it doesn't rain for seven months, then that's how long they go without a drink. 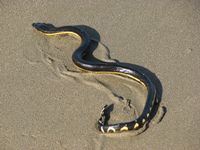 Though the snakes are then nearly dehydrated, they keep waiting for fresh water. Scientists had thought that sea snakes would drink the salt sea water and then excrete the superfluous salt via their salt glands. Actually, they do excrete extra salt, though not because they drink salt water.

The study was conducted on the yellow-bellied sea snake, Pelamis platura. It lives in tropical oceans. Both in the wild and in laboratories these snakes were observed avoiding the drinking of salt water, waiting instead for rain.

When it rains, the fresh water – by virtue of its lower density – floats as a puddle on the surface of sea water. In the ocean this layer remains intact for a number of days. In lagoons, where the sea snakes thrive, the layer of fresh water can persist even longer. Snakes drink this rainwater shortly after it has fallen. The snakes exhibit behaviour changes when a tropical storm nears; apparently they ‘know’ when it is raining, or about to rain.

Although the snakes live in water, they actually inhabit a kind of desert. In the areas where these snakes are found (near Costa Rica, for example) it can take as long as seven months to rain. The sea snakes slowly dehydrate, losing up to a quarter of their body mass.

This study could explain why the sea snake population is declining so rapidly, as it has in the sea north of Australia. This area has become increasingly dry. It looks as if there is no more room in these areas for the sea snake.
Photo license: Creative Commons Attribution-Share Alike 3.0