Source: burgerszoo.nl, phote by Albert Kok
The end of March saw a very remarkable animal transport. A West Indian manatee - a species of sea cow - was moved by lorry to Paris, from Burgers' Zoo in the Netherlands. This operation took place under the auspices of the European Caribbean manatee breeding programme. 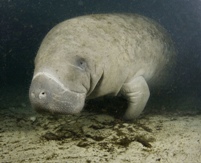 The transport was remarkable because the male animal weighs hundreds of kilogrammes, and had to be moved in a special crate. In order to catch the sea cow, the water level in his enclosure had to be lowered so that the manatee could be caught in a net.

Eight different European zoos are now home to more than thirty of these animals. In the Netherlands, this species is only present at Burgers’ Zoo. These sea cows are occasionally transported to different locations in an effort to maintain the health of the population, and to give as many zoos as possible the opportunity to breed the West Indian manatee.

Sea cows are expensive boarders; at Burgers’ Zoo they are the most costly animals to keep. The high price has to do with their feed: these animals consume an enormous amount of endive lettuce. Each animal eats about 30 kilos of endive a day, as this vegetable is the closest in nutritional value to the water plants the animals eat in the wild. An additional advantage is that the heads of endive float on the surface of the water, just like water hyacinths. Unfortunately, endive is quite pricey when not in season. Other foodstuffs the manatees are given include carrots, red beetroot, potatoes and Brussels sprouts, all cooked, as well as raw bell pepper, pre-soaked dog feed, and a few slices of bread.

In the wild, West Indian manatees range from Florida to the mouth of the Amazon. By consuming such enormous amounts of water plants, they prevent the rivers from becoming overgrown. As manatees are mammals, they must surface regularly in order to breathe. This puts them at risk for harm by boat propellers; they can also become entangled in fishnets. The manatee is protected in many natural parks in the United States and South America.
Photo license: Creative Commons Attribution-Share Alike 3.0