Source: artis.nl
The gorillas of Royal Artis Zoo can now enjoy a new outdoor enclosure, fully refurbished with new trees and plants to allow them better climbing and scrambling. The gorillas share their enclosure with white-throated monkeys and meerkats. 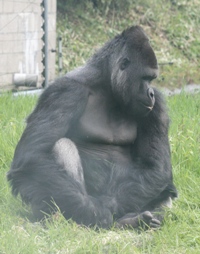 Although the three species share the enclosure, all three also have their own place to which they can retire. For the meerkats, new to this enclosure, there is an underground network of pipes. The meerkats eat mice, which helps to keep the enclosure free of pests. The white-throated monkeys can withdraw to their night-time enclosure, not accessible to the gorillas, via branches and a rope ladder. There are also places to which the western lowland gorillas can withdraw, and two heated and well-protected spots have been created so that the animals can also go outdoors in bad weather.

Trees for the renovated enclosure were given to Artis by the Netherlands Open Air Museum. Also used — re-used — was an old beech tree that had previously blown down during a storm.