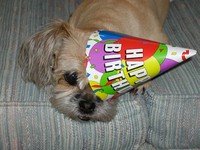 The pet insurance company Veterinary Pet Insurance held an inquiry, which showed that 58% of the pet owners put their cat, dog or bird in the spotlights during their birthday. The party cannot be exuberant enough. Not only will there be cake, but hats and other party attributes will also be purchased. In some cases playmates are even invited to liven up the party.

Other researches confirm that American families celebrate their pets birthday.
Around six million families state that they have a party on that special day. Numbers from Three Dog Bakery in California show an average of twenty party cakes per week. This is in accordance with the numbers from the researches.