Source: news.nationalgeographic.com, photo by Viniciusmc
In the past year, a whopping 18,000 new animals and plants have been discovered. Including remarkable finds, such as a meat-eating mammal in Ecuador and a dragon tree twelve metres high! 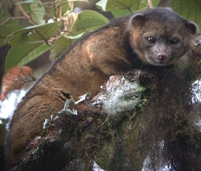 The total number of animals, plants and fungi is estimated to be 12 million, and if we count bacteria and microbes, the number jumps to about 50 million. Of these, less than two million have been discovered and described. Surprisingly enough, the tempo at which new species are being discovered and described has not changed since the end of the last century. Annually, 17,000 to 18,000 species join the list.
An international committee of taxonomists has put together a top 10 of the new species. One of them is the olinguito, the carnivorous mammal from Ecuador. This meat eater is a member of the raccoon family, and looks like a cross between a teddy bear and a cat. Its place in the top 10 is well deserved: this is the first meat eater discovered in the Western Hemisphere in the past 35 years.

Another member of the top 10 is a transparent shrimp that lives in a cave on the island of Santa Catalina (off the coast of California). The shrimp (Liropus minusculus) is only three millimetres long. Another cave-dweller is the Zospeum tholossum, a ghost snail without eyes. This animal doesn’t miss them, though, in a cave 900 metres under Croatia. It’s called a ghost snail because its shell lacks pigment. It appears to be the slowest snail on Earth, moving only a few millimetres a week.