Source: scientias.nl
Polar bears eat primarily marine animals, such as seals, that often have a thick layer of fat under the skin. This blubber is a polar bear delicacy. Even though they take in so much fat, though, polar bears to not get fat themselves and are not troubled by heart disease - unlike humans with a high-fat diet. 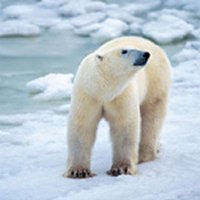 For the key to this secret we can look to the genome of the polar bear, research has now demonstrated. The polar bear genome was compared to that of a close relative, the brown bear. Polar bears have a number of genes that seem to allow it to survive in the extreme conditions near the pole. The genes regulate fatty acid metabolism and the functioning of the heart and blood vessels. One of these genes is called APOB, and it controls the movement of cholesterol from the vessels into the cells, significantly reducing the chance of heart disease. According to one of the researchers, this drastic genetic reaction to chronically high amounts of dietary fats and cholesterol has never before been seen. This adaptation to the fatty diet has taken place remarkably quickly. The Polar bear has only existed for 500,000 years, and the diet high in fats has been on the menu for ‘only’ 100,000 years.

The researchers say that the study is not only important to tell us more about the polar bear: human nutrition is going to increasingly resemble the fatty polar bear diet, and knowledge about that animal’s genes and how they allow it to thrive on that diet could also offer us tools for altering human physiology.