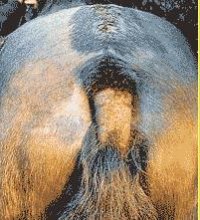 Several places in the World have clinical pictures that resemble each other closely. De skin disease is known in Australia as 'Queensland Itch', in Great Britain as 'Sweet Itch', in the USA as 'Allergic Dermatitis' and in Germany as 'Sommerekzem'.

Horses suffering from this complaint get an infection combined with severe itching. The resulting chafing leads to hair loss and damaging of the skin. The tail head and the base of the mane are affected most often.

Unquiet behaviour can reveal the disease in an early stadium. Inspection of the skin and coat shows that the skin is scurfy and that there are skin thickenings. Other symptoms include the easy braking or falling out of hair. If the disease returns each year, the horse may develop hyper keratinizing, ridges and skin with permanent hair loss over the damages.

The Animal Sciences Group of Wageningen University conducts an inquiry into the disease. Using a survey, the researchers try to get insight in the factors in the immediate vicinity of the horse or pony that affect the development of Summer Eczema.