Source: D.J. Shepherdson, Second Nature, 1998
To optimise the psychological and hereby also the physical well-being of animals, environmental improvement is made use of. 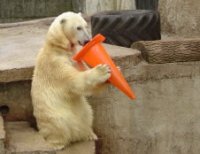 A good example of such improvement is the spreading out of feed in the animals residence. But also making the feed less accessible, placing natural objects in the animal sojourn, providing play material and even the training of animals are forms of environmental improvement. Because of these practises, animals will be less bored and stressed.


Hiding feed and making it less accessible is a cheap and easy way of environmental improvement. A disadvantage, however, is that it is not so easy to check which animals gets which ration. This can be solved by not using the entire feed but only snacks to keep the animals busy. Be aware, though, that feed which is lying around may attract vermin.


Imitating the natural surroundings can be a form of behavioural improvement for the animal. The animal can express more of its natural behaviour, and this diminishes stress. Besides, an animals natural habitat looks nicer to, for example, visitors of zoos. It does diminish the space, however, and gives the animals more opportunities to hide. In zoos this can be a great disadvantage. Furthermore, a residence which is too large can be a disadvantage in a zoo. A large, nature surrounding is nice, but it becomes more difficult for the visitors to see the animals.


It looks nice when toys are being placed in the living quarters, especially when the animals actually play with them. Playing with toys also diminishes the animals amount of stress. But not all forms and materials of toys can be placed with all animals. Some animals ruin certain materials easily and can possibly eat pieces and even choke in it.


Training is fun for the public, and people are prepared to pay money for it. The animals become tame and are more easily handled by a vet. The training itself, as well as the performance, causes distraction and less stress, if it is not conducted under force of pain. If the animals, however, remain housed in small cages outside their training time, the behavioural improvement is annulled. Often, animals will then still start to show stereotypical behaviour.