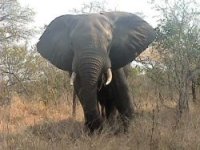 In particular the composition of the carbohydrates and the amount of it which is being absorbed determines the concentration of volatile fatty acids that arise during the digestion.

Indissoluble cell wall components (cellulose, lignin, some hemicelluloses and pectin) can slow down the fermentation speed. Consequently, the disappearance speed slows down, while the volume of the contents in the large intestine increases.

Caecum acidosis will occur less often than rumen acidosis (acidification of the rumen)
The reason for this is that the elephants feed first passes through the stomach and small intestine before it ends up in the caecum and the colon.