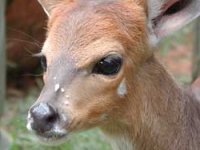 Bushbuck (Tragelaphus scriptus) often deposit faeces at specific localised defecation sites (LDS). We tested whether LDS have a function in the context of parasite avoidance. In a population of bushbuck in Queen Elizabeth National Park, Uganda, seven radio-collared individuals were observed. We recorded feeding behaviour inside and outside LDS. Furthermore, pasture contamination with gastro-intestinal tract parasites inside and outside LDS was examined. There were significant differences between the expected and the observed feeding rates inside LDS, but, contrary to our prediction, the bushbuck increased their feeding rate inside LDS. There was no significant difference in the parasite contamination of pastures inside and outside LDS. We discuss the hypothesis that LDS mainly serve a social function in bushbuck communities, whereas parasite avoidance seems to play a minor or no role.