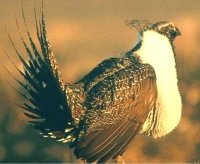 annual productivity during some years, little information is available on this aspect of sage-grouse reproductive ecology. We investigated the relationship between total plasma protein, age of hen, time of first nest initiation, and time of first nest loss on occurrence of renesting. We captured, assigned age, extracted blood, and radiomarked prelaying, female sage-grouse on 4 study areas during 19992004. We monitored radiomarked females from mid-April through June to identify period of nest initiation (early, mid, or late), nest loss (early or late), and renesting activity. We only considered hens that were available to renest (n = 143) for analysis, and we censored those that nested successfully or died during their first nest attempt. Depredation and abandonment accounted for 85% (122/143) and 15% (21/143) of the unsuccessful first nests, respectively. The proportion of hens renesting was 34% (48/143) across all study areas and years. Akaike's Information Criterion model selection indicated that occurrence of renesting varied by age, nest initiation period, nest loss period, and total plasma protein. The best model had low predictive power for any given hen (r 2 = 0.296), but validation of the best model indicated that our predictor variables were important for distinguishing renesting status and likely explained substantial temporal and spatial variation in renesting rates. A greater proportion of adults than yearlings renested, and hens that nested early in the nesting season and lost nests early during incubation were the most likely to renest. Hens that renested had greater total plasma protein levels than non-renesting hens independent of age, nest initiation period, and nest loss period. Because sage-grouse depend on exogenous sources of protein for reproduction, land management practices that promote high-quality, prelaying hen habitat could increase dietary protein intake and sage-grouse renesting rates.
more info