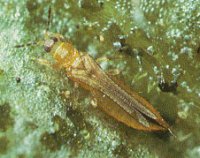 The objective of this study was to evaluate effects of total rainfall, mean temperature, natural enemies, chemical composition of leaves, levels of nitrogen and potassium on leaves and density of leaf trichomes on attack intensity of Thrips palmi Karny (Thysanoptera: Thripidae) and Aphis gossypii (Glover) (Homoptera: Aphididae) on plantations of the eggplant (Solanum melongena) in two regions of Minas Gerais, Brazil. Higher numbers of A. gossypii/leaf and T. palmi/leaf were observed in plantations of this eggplant in the Municipalities of Viçosa and Guidoval, respectively. Guidoval had a rainy and hotter weather than Viçosa. T. palmi was almost positivelly correlated with rainfall (r= 0.49, P= 0.0538) while A. gossypii seemed to be more affected by mean temperature (r= -0.31; P= 0.1134). Higher number of aphids in eggplants in Viçosa than in Guidoval could be explained by the higher number of natural enemies such as Adialytus spp. (Hymenoptera: Braconidae), Cycloneda sanguinea (L.) and Exochomus bimaculosus Mulsant (Coleoptera: Coccinellidae) and Chrysoperla spp. (Neuroptera: Chrysopidae) in this municipality. However, only Adialytus spp. was significativelly correlated with aphid populations. Higher number of T. palmi in eggplant plantations of Guidoval than in Viçosa could be due to the absence of its possible Eulophidae parasitoid in the first municipality. The spiders were significativelly correlated with this pest in both municipalities.
Full text (pdf)