Author: Tara van Beelen, source photo: bbc.co.uk
Obesity is not only becoming a national epidemic in humans but also in pets. There is also a relation between obesity in humans and their pets. The fatter the owner, the fatter the pet. Also in tame rats this is a serious problem. 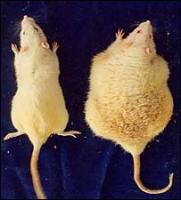 Obesity is not an isolated problem, but it brings along several health issues, such as joint problems and diabetes.
Obesity is difficult to determine in rats and information on this is hard to find in the literature. The normal weight of a female is between 250 and 400 grams. That of a male is between 300 and 600 grams. The large difference between the minimum and maximum weight is due to the variety in physique and length of the rats. Therefore, weight does not say it all. For a small female rat 400 grams is too heavy.

In many animal species it is possible to diagnose obesity by feeling the animal. But this does not apply to rats. Also in a rat that is overweight the vertebrae and ribs are easy to feel. A third way to determine whether the animal suffers from obesity is simply by looking. Most fat deposits can be found around the belly, the hips and the buttocks. These can not only be felt, but they can definitely also be seen.

The consequences of obesity in rats are:

Measures that a rat owner can take to lower the risk of obesity are: