Source: vroegevogels.vara.nl
As of the start of this month (1 July 2014), it is illegal in the Netherlands to take young parrots and parakeets away from their parents and rear them by hand. The new 'Besluit houders van dieren' (decree regarding animal keepers) includes ... 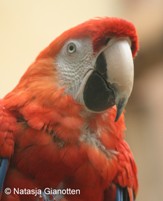 a determination, for each species, of the age at which young animals may be separated from their parents. In 2009, the Stichting Papegaai (Parrot Foundation) and the Adviespraktijk voor Vogels (avian consultant) began a campaign that has now resulted in this legislation. The new law stipulates that juvenile parrots and parakeets must be left with their parents until they are able to feed on their own, no longer dependent on their parents. The age at which this independence is achieved is different for each species. A budgerigar can feed independently after seven or eight weeks; for some aras it can take four or five months.

With the introduction of this new law, trade in baby parrots and parakeets becomes a criminal offense. Jan Hooijmeijer of the Adviespraktijk voor Vogels, in Meppel, the Netherlands, calls the law a spectacular breakthrough for animal welfare. The Netherlands is the first country to pass legislation to regulate the separation of these birds from their parents. For other pet species, such as dogs and cats, there has long been a stipulation of the age until which the young animals must be left with their mother, because early separation can result in serious behavioural problems. ‘The intelligence of parrots is equivalent to that of a four-year-old child, and the larger species have a life expectancy of 80 to 90 years”, Hooijmeijer said on the radio programme Vroege Vogels. This makes it essential that the birds get a good start in life, with their own parents.