Source: Telegraaf
Almost half of all Dutch pets is overweight. This is the result of a research conducted by Hill's, a company for animal feed, among dozens of vets who treat these animals. 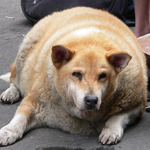 Animals that are overweight often have many health problems. Cats often develop diabetes; while dogs are more often prone to problems concerning the heart and joints. The cause is often too much food, too many snacks, and too little exercise.
According to vet De Boer people often feed their cat dry food in the morning, which will be left the entire day, giving the animal the opportunity to snack all day through. Much healthier would be to feed the cat only once or twice a day. According to De Boer, a piece of cheese is for such a small animal a real calorie-bomb.
The research also showed that most overfed pets are those of single women.